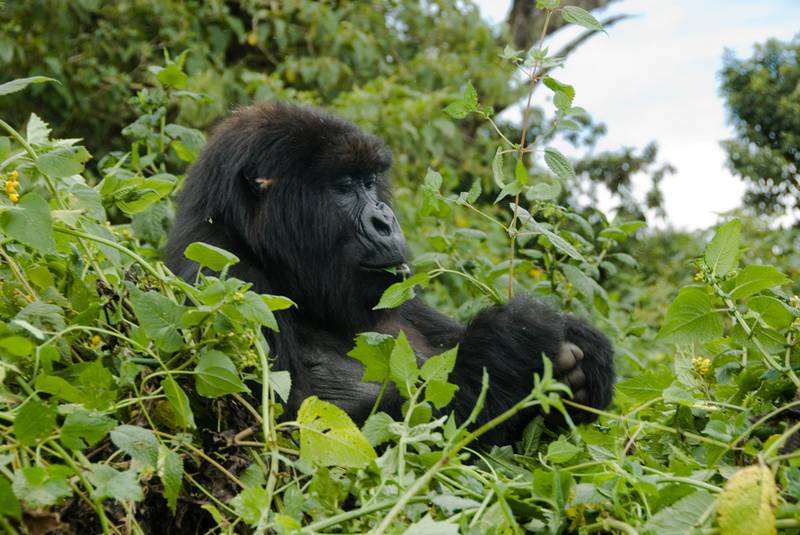 FROM THE CUCKOO’S NEST December 2017

FROM THE CUCKOO’S NEST DECEMBER/JANUARY 2018
Primates.
Gorillas
Oruzogo group, which I am now told, has split into 2 groups, has been in the forest, close to Cuckooland, for several periods in the last month. I have seen gorilla poo nearby in the forest. It seems that they now enjoy coming our way, whereas before it was rare for them to come this side. So, I am hoping to see them soon.
Chimpanzees
They have been making lots of noise in the last few days, especially in the evenings and at night, although I have only seen them a few times in the last month.
Other monkeys
As I write this, black and white colobus are jumping about in the trees below me. Had plenty of sightings of baboons, red-tailed and blue monkeys the last few weeks.
Birds

December has been a month of Cuckoos. I have seen Levaillant’s, Diederick, Klaas’s, African Emerald and Black Cuckoos and heard Red-chested, Dusky (I can hear it now), and Barred Long-tailed and even what I take to be Olive Long-tailed. It seems that they all come at the end of the rains. Other notable sightings include:
Yellowbill
Black-throated apalis
Mountain greenbull
Blue-headed sunbird
Black-billed turaco
Great blue turaco
Petit’s Cuckoo shrike
Brown-capped weaver
Yellow-throated longclaw
Buff-spotted woodpecker
Tulberg’s woodpecker
Yellow-spotted barbet
African green pigeon
Petit’s Cuckoo shrike
Black cuckoo Shrike
Yellow-eyed Black flycatcher
Fruit of the Land
Have been gorging on the sweet variety of passion fruit-almost finished now.
In the garden, we have plenty of salad veg – lettuce, Chinese cabbage, rocket etc , as well as tomatoes, green peppers, leeks and cabbage. And first artichoke is beginning to produce flowers.
Philip